Posted on January 21, 2012 by Filip Cleeren in Features No Comments

After a long, exhausting season of competing at the highest level, there’s a bit of a break for most F1 personnel. That is: unless they are directly involved in designing and building the new car, which dramatically reduces their holidays to a bare minimum. The drivers themselves spend as much time with their families and their favourite gym equipment as getting itchy feet and developing a lingering desire to get back behind the wheel of any vehicle featuring an engine. Which many of them do.

The annual Race Of Champions is considered to be the “official” start of the off season in early December, when a select elite of international motor racing stars battle it out in identical machinery on a compact figure-of-eigth layout. For the second year running, the Düsseldorf ESPRIT arena was the motorsport temple of choice, with a massive effort put it to convert the closed-roof football stadium into a temporary race course.

As is to be expected from champions, the event’s atmosphere is as competitive as it is chilled out. It is a great opportunity for race fans to watch their heroes from motorsport series around the world from up close, just as it is an ideal time an place for the stars themselves to catch up, exchange stories and meet colleagues from other categories they otherwise wouldn’t get to see. Let alone wrecking eachothers’ favourite pair of denim during a wild afterparty. For a fifth consecutive time Michael Schumacher and Sebastian Vettel propelled Team Germany to the ROC Nations Cup, while new boy Sébastien Ogier beat Le Mans legend Tom Kristensen to be crowned Champion of Champions in the individual competition.

A week after the Race Of Champions, the equally traditional ERDF Masters Kart event in Paris-Bercy takes the stars back to basics: go-karting. The ERDF Masters are organised by former F1 driver Philippe Streiff, who was left paralysed after a horrific testing accident in Rio in 1989. Streiff has been using a wheelchair ever since and turned to business affairs as well as organising the all-star karting event. He still pays visits to the F1 paddock on occasion, making an appearance last year at the Belgian grand prix.

Brazil’s motorsports aces are usually found around Florianopolis at Felipe Massa’s charity kart race, although it was Spaniard Jaime Alguersuari who won the event following a penalty for Frenchman Jules Bianchi. After being shoved aside by Toro Rosso, Alguersuari will have plenty of time to spend on his passion of performing as a DJ. 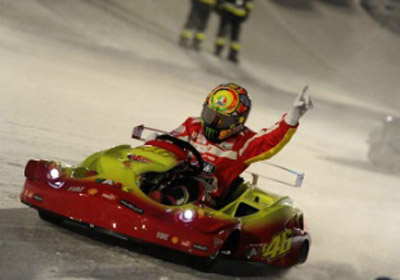 After the Christmas and New Year break, Autosport gathered an impressive array of carbon fibre and motorsports personnel at its Autosport International show in Birmingham, while blood-related Ferrari and Ducati set up shop in the Italian Alps for their annual Wrooom! Event at Madonna di Campiglio. Shockingly, the event too featured a karting showdown – on ice, nonetheless – with MotoGP legend Valentino Rossi upsetting his Ferrari friends Fernando Alonso and Felipe Massa.

Down in Maranello or any other factory there is arguably less time left for pleasantries. Time is ticking away as the paddock is counting down to the first pre-season test in Jerez on 7 February. Next Thursday, Caterham, the artists formerly known as Team Lotus, will be the first to unveil their new 2012 challenger.