Posted on January 30, 2012 by Filip Cleeren in Features No Comments 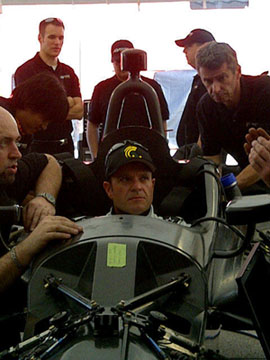 On request from his friend Tony kanaan, Rubens Barrichello participated in a two-day Sebring test to assist KV Racing.

They hail from Brazil, they are in their late thirties and they have a wealth of experience in the world of open wheel racing. They enjoyed many race wins between them, but ultimately never managed to grab a major championship. Rubens Barrichello and Tony Kanaan have always had plenty of things in common to become close friends outside racing. Finally they have joined forces on track as well.

On Kanaan’s request, Barrichello joined KV Racing for a two-day test at Sebring to provide technical feedback on the new-for-2012 Dallara Chevrolet to his buddy Kanaan, who is set for his second season with the outfit. Having lost his seat at the dwindling Williams team to Bruno Senna, an IndyCar drive seems to be the only viable alternative for the ever-hungry Barrichello. The 11-time grand prix winner stands as the most experienced driver in Formule 1 at well over 300 grand prix starts, but the 39-year-old doesn’t seem to be anywhere near ready to hang up his helmet.

Having Rubens on the grid would be a coup for IndyCar. The series is struggling to generate positive attention and TV ratings. IndyCar recently lost its household name – a rare commodity – Danica Patrick to NASCAR and is more importantly looking to bounce back from the tragic accident of reigning Indy 500 champion Dan Wheldon at Las Vegas. Barrichello is hugely popular in Brazil and would attract a massive amount of interest for the series’ race in Sao Paulo, Barrichello’s hometown, and the other road course races he might contest. Whether we’ll see Rubens at the Indy 500 or any other oval seems rather doubtful. As a sample of his popularity Barrichello has over 1.4 million followers on Twitter compared to 400,000 for both Patrick and Kanaan. Not a bad asset for a series that – rightly – puts a lot of energy in social media activation.

Any team owner would welcome the chemistry between Barrichello and Kanaan. They are long-time friends and established the Barrichello Kanaan Foundation, a non-profit organisation that supports social institutions and programmes in Brazil. In 2006, the two swapped helmets for the Monaco grand prix and the Indy 500 which took place on the same day. If Barrichello and KV Racing do agree to continue beyond a one-off test, Rubens might need to give up his lucky number 11 from his karting days. Ever since Kanaan’s 7-Eleven days at Andretti, that number has belonged to TK …

Video: Barrichello and Kanaan at Sebring

“Rubens just got here and already took my locker.” Tony Kanaan on Twitter.