Posted on February 15, 2012 by Filip Cleeren in Features No Comments 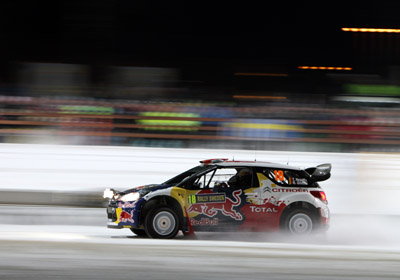 In the WRC rally of Sweden, Thierry Neuville made it to the finish in his first rally on snow and ice (©DPPI)

Thierry Neuville finished the WRC Rally of Sweden, his first ever rally on snow and ice, in twelfth spot. A training session with Tommi Mäkinen helped him gain confidence in tricky Swedish conditions.

“This was the first time I have driven in conditions like these, so it was all new to me. Sometimes, I had to make a lot of corrections to my pace notes, which were a little bit optimistic,” says Neuville, driving for the Citroën Junior World Rally Team. “When I felt good in the car and the road conditions were less tricky, I pushed more and my times were better. I think this experience also means that I will go into the next few rallies with a little more confidence”, the FSE-backed Belgian concludes.

Earlier four times World Rally Champion Tommi Mäkinen and his team improved the Belgian rally star’s skills in slippery conditions. A masterclass from a true legend. “We have been fortunate enough to join a very professional team and we have listened to all the advice we were given”, said Neuville. “I still had to learn about how studded tyres work on ice and snow, so my aim was to just make it to the finish.”