Posted on March 18, 2012 by Filip Cleeren in Features No Comments 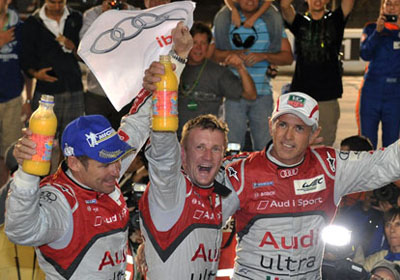 The 60th Anniversary of the 12 Hours of Sebring couldn’t have wished for a more fitting winning combination. In Florida, living Le Mans legends Tom Kristensen (44), Dindo Capello (48) and Allan McNish (42) took a commanding win for Audi in the first round of the new World Endurance Championship. Kristensen took his Sebring record to six overall wins, ahead of Capello’s five and McNish’s four victories at the demanding track. Audi made it a one-two with the R18 driven by Timo Bernhard, Romain Dumas and Loïc Duval finishing second, albeit four laps down.

The veteran trio endured a tough year in 2011, with McNish’s massive shunt in Le Mans as a symbolic example. With André Lotterer, Benoît Treluyer and Marcel Fässler a younger generation delivered Audi another key victory over Peugeot for the second consecutive year, but at Sebring the ‘elder statesmen’ proved a point and showed they are still a great force to be reckoned with. In June, chasing a new Le Mans win since their last success in 2008, Kristensen, Capello and McNish will take the wheel of the new R18 e-tron quattro hybrid diesel.

After Peugeot’s late pull-out from the World Endurance Championship, Audi were in a league of their own at the bumpy airfield course. But a typical, thrilling GT battle made up for a lack of competition at the front. Rahal Letterman Lanigan’s BMW took the victory with Joey Hand, Dirk Muller and Jonathan Summerton at the wheel.