Posted on March 25, 2012 by Filip Cleeren in Columns No Comments 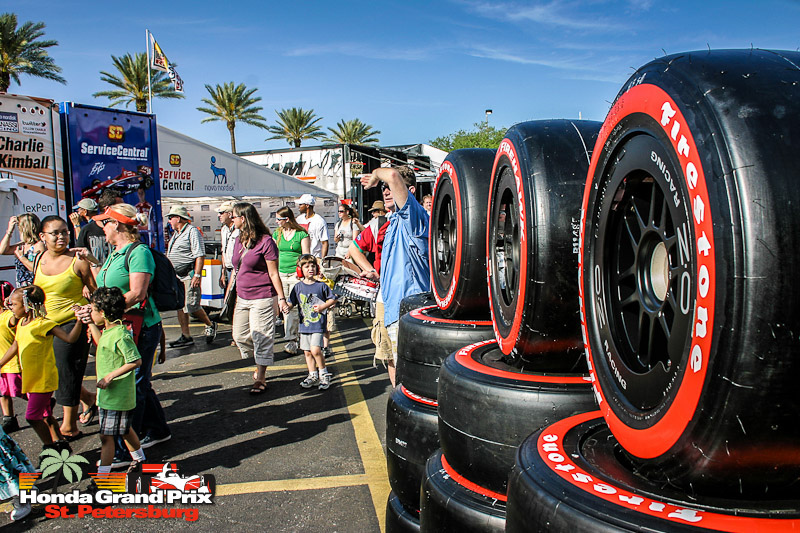 Formula 1 is linked to many exciting concepts like innovation, technology, speed and competition. Fan-friendliness is not one of them. It doesn’t have to be that way. Sometimes the sport would do well to look around and take in examples from events that come up with fresh ideas.

In sharp contrast to Formula 1, which has the commercial high ground because of its vast, worldwide audience, IndyCar has its work cut out seeking and then adequately serving its customer. Competing with the now dominant NASCAR, the IZOD IndyCar Series has to be creative to try and maximalise its exposure and give its fanbase the best possible experience. Which results in finding new ways to give them first-rate access, something which F1 could draw plenty of lessons from.

In 2010 IndyCar hired Randy Bernard to reinvigorate the series. Bernard was an IndyCar rookie, but previously turned Professional Bull Riding from a small niche sport into a national, big-money business. Since his appointment, Bernard and his marketing team haven’t left a stone unturned trying to reconnect to the fans who turned away after the split with ChampCar and selling their product to a new audience.

Last year, the series introduced the IndyCar Fan Village at each of the 17 venues on the calender. The Fan Village is a central location that showcases sponsor products, provides social media lounges or video game simulations and plays host to autograph and Q&A session with past and present IndyCar drivers. Everyone wins: IndyCar pleases its sponsors as they get in touch with potential customers, who in turn get the possibility to meet up with the favourite drivers.

A relatively new phenomenon is the so-called ‘tweet-up’, a fan meeting IndyCar officials, bloggers or fans organise through Twitter, which is usually attended by a few drivers. At the Indy 500, the family-oriented approach is pushed even further.

The series also opened up garage access to children, trying to improve the appeal of race weekend as a true family getaway. Everyone who has ever been exposed to motorsports at a young age – either by being dragged along to the races or watching the action on tv with their parents – understands how crucial that element of immersion is to becoming a life-long enthusiast of the sport.

It doesn’t take a rocket scientist to point out that bringing the sport to the fans works best at street races in a metropolitan area, which now make up a large part of the calendar. Oval fans have been wailing for a long while about the demise of their beloved speedways, but IndyCar does not dictate the economy. In the end it doesn’t make any sense to go to places where the series isn’t really wanted. The only way forward for the sport is to improve its product and win new souls.

Formule 1 is blatantly lagging behind in terms of value-for-money and accessibility, arguably because its existence doesn’t depend on those areas and because the sport feels it is popular enough not to go to great lengths to improve.

The Formula One Teams Association came up with the FOTA Fans Forum to bring fans closer to the sport. At events in Montreal, Woking (McLaren), Milan and Barcelona, fans got the opportunity to ask questions to a diverse panel of F1 drivers, team principals and engineers. It is a successful initiative, but seems to be more aimed at the hardcore, armchair critic rather than the casual fan.

At the actual grand prix, fan experience is still pretty limited. A situation which sometimes leaves families wondering why they coughed up a vast sum of money on a non-interactive three-day F1 visit, rather than spending the same amount of savings on a two-week holiday abroad. If more and more households start opting for the latter, the sport would fail to catch the imagination of tomorrow’s generation. Perhaps it’s time for Formula 1 to take the bull by its horns.