Posted on March 26, 2012 by Filip Cleeren in Features No Comments 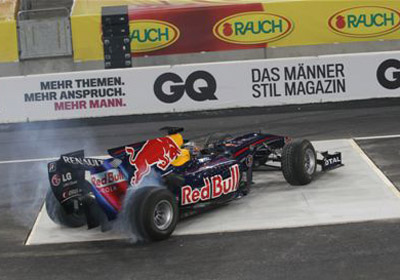 Sebastian Vettel takes his Red Bull F1 out for a spin to lay down rubber on art panels.

The Race of Champions has launched a charity auction to raise money for a wide array of good causes. Race fans get the chance to bid on three works of art, created by the likes of Sebastian Vettel, Lewis Hamilton and David Coulthard.

The racers created the pieces by performing burnouts and doughnuts in their F1 cars at Race Of Champions world finals. Vettel took to the canvas at the 2010 event in Düsseldorf just days after winning his first F1 world championship. The two British drivers produced their work at London’s Wembley Stadium in 2008 after Hamilton’s own title triumph and Coulthard’s retirement from F1. Both Hamilton and Coulthard’s ROC Art panels have since been painted by Brazil’s popular artist Romero Britto.

Now the fruits of their artistic endeavour, each signed by its driver-creator, are going under the hammer in an online charity auction. All proceeds from the sales will go to the Race Of Champions’ favoured charity ICM (the Institute for advanced research on brain and spinal cord disorders) the Britto Foundation and other good causes chosen by the drivers such as Wings for Life.

Vettel said: “We had a good time going round in our F1 cars, scribbling down some lines by doing burnouts and leaving some rubber. That’s how we created it and it’s really nice that it’s been turned into art. It’s something special and I’ll look back at it and enjoy the memory of my first championship in 2010. The main thing is that this money goes to charity. You’ll definitely help a lot of people by opening your wallet so it would be nice if there are a lot of people bidding.”

Coulthard added: “I love art generally and I’ve got all sorts of random art in my home. Romero Britto is an incredible artist with some amazing works out there. As for Seb’s piece, this is a unique opportunity to get artwork from the youngest ever double world champion. So it’s great that ROC is supporting these foundations in this way.”

The auction runs until April 2. Details can be found at http://is.gd/raceofchampions.