Posted on April 5, 2012 by Scott Russell in Features No Comments 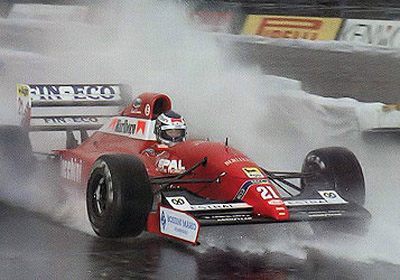 The Trofeo was held deep into the Italian winter. Temperatures hovered just above zero, and drizzle was not uncommon, as this 1992 photo of JJ Lehto shows.

However, Lotus did win an F1 event 5 years later, when Johnny Herbert took a Lotus 107-Judd to victory at the Trofeo Indoor Formula One event at the Bologna Motor Show.

The Trofeo (also known as the Bologna Sprints) was a non-championship F1 event held at the Bologna Motor Show between 1988 and 1996. Despite the “indoor” title, the competition was held on a short, twisty, outdoors circuit. Lap-times were about a minute, with an average speed of about 90km/h. Generally, around half a dozen cars were entered, often by little Italian teams like Coloni, Minardi and Osella. The entry list was divided into pairs, and each pair would race head-to-head, starting at opposite ends of the circuit. The winner would advance to the next round until only the victor was still standing.

The first event was held in 1988, featuring a pair of Minardis (for Pierluigi Martini and currennt HRT boss Luis Perez Sala), and one car each from EuroBrun (Fabrizio Barbazza), Osella (Nicola Larini) and BMS Dallara (Alex Caffi). Completing the half-dozen was a solitary example of the appalling FIRST 188 chassis, driven by Gabriele Tarquini, who lapped five seconds off the pace. Perez Sala took the victory, after Caffi crashed in the final.

The following two-years saw seven entries each, with Perez Sala winning an all Minardi final in 1989, and Gianni Morbidelli taking a hat-track for Minardi the following year. Tarquini took the first non-Minardi win in 1991, taking a Fondmetal to the top of the podium. Herbert took Lotus’s last F1 victory the following year, in a field that included a number of talents including Alex Zanardi, Christian Fittipaldi, Michele Alboreto and JJ Lehto. Rubens Barrichello won for Jordan in 1993, before the event took a break in 1994. 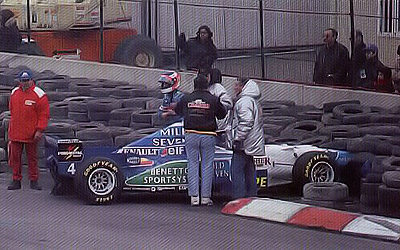 The event returned in 1995, with three Minardi M195s taking on three FG01s constructed by the new Forti team. It was a Minardi walkover, with Giancarlo Fisichella winning from Luca Badoer and Pierluigi Martini in a Minardi 1-2-3.

The very last race took place in 1996, and featured arguably the strongest entry list in the history of the event, with two Benettons, two Minardis, and two Ligiers. In the end, Giancarlo Fisichella took his second consecutive win, ahead of Giancarlo Lavaggi in a Minardi. Tarso Marques (Minardi) and Jarno Trulli (Benetton) tied for third.

In 1997, the event switched to Formula 3000, and that was that. Trofeo Indoor Formula One was no more. Also no more were non-Championship Formula 1 races – the Trofeos were the last ever staged.