Posted on April 11, 2012 by Filip Cleeren in Features No Comments 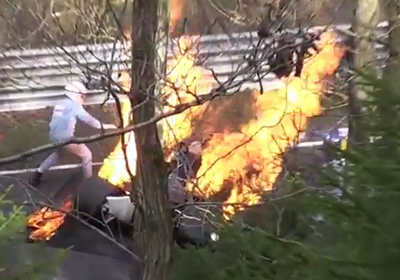 A Nürburg local took his dog for a walk from Breidscheid to Bergwerk. And saw a Ferrari Formula 1 car. On fire.

F1 fans will instantly make the connection with Niki Lauda’s terrifying crash in 1976. And rightly so, because the man walked right onto the filmset of Rush, Ron Howard’s film on the gripping battle between Lauda and James Hunt for the ’76 world championship.

Today Howard’s crew were in town to re-enact one of the most famous scenes in motor racing history. During the second lap of the 1976 race Niki Lauda’s Ferrari veered off the road after a mechanical failure. Following the crash Lauda’s car caught fire, with the Austrian trapped inside the cockpit. Several drivers stopped to come to his aid. Lauda miraculously escaped albeit severely injured and burnt.

Lauda spectacularly returned only six weeks and two grand prix later to defend his championship lead against the resurging Hunt. The rest is history. And soon part of Rush.