Posted on May 27, 2012 by Filip Cleeren in Columns No Comments 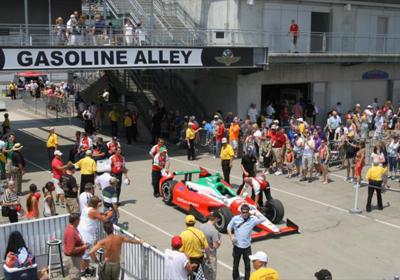 It is hard to understand what the Indianapolis 500 means until you’ve been there.

Unlike Formula 1, which is more or less spread over twenty evenly matched events, IndyCar largely revolves around two weeks in May that are the most important days in the year for hundreds of thousands of fans.

Over one hundred years ago a group of Indianapolis businessmen conceived the ambitious idea of building a 2.5 mile race track on the outskirts of town, but little did they know how big their speedway and its signature event would become.

Little did they know how much motor racing history would be written at the Brickyard.

And little did they know how much the Indianapolis 500 would mean to the people of Indiana and motor racing fans all across the country.

The sense of history is tanglible as soon as you enter the impressive facility. The IMS Hall of Fame Museum keeps fans up to date with everything you could possibly want to know about the place.

But it’s the speedway itself that speaks volumes. From the three-foot strip of bricks reminiscing of days long gone to the deep-rooted passion from the locals: this place just breathes tradition.

Looking rather grey in the week leading up to the big race, on Sunday over 250,000 fans of all ages gave the massive grandstands around the century-old facility plenty of colour.

When the green flag is waved, the symphony of eleven rows of three turbocharged V6’s taking the green flag only marginally eclipses the roar of the crowd in the mother of all goosebump moments.

In contrast to the exclusive world of Formula 1, the Indy 500 is a true fan-friendly family event, where motor racing heroes turn out to be human and accesible after all.

With numerous references to the speedway in the eponymous suburb and the 400,000 capacity grandstands looming from afar, the Indianapolis Motor Speedway is hard to miss. But as the chequered flag drops on Sunday afternoon and the month of May is over, the place also becomes hard to leave.