Posted on May 28, 2012 by Filip Cleeren in Columns No Comments 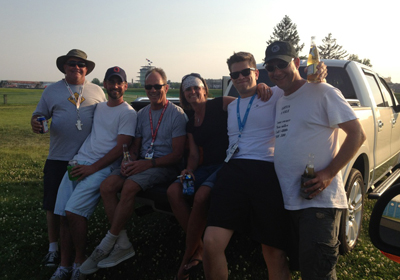 They say Hoosiers, people from Indiana, are some of the friendliest people you’ll meet in the US of A. After spending ten days in the self-proclaimed racing capitol of the world, it is hard to disagree with that statement. Most people I have met, the Indianapolis Motor Speedway staff, IndyCar personnel, my great host in town and some of Indy’s lifelong fans, have all been extremely welcoming and helpful during my ‘rookie year’ at the 500.

My host Kim was so great to actually buy me a bicycle so I could commute from downtown Indy to the Speedway and back every day and let me stay in her house as if it were mine. Coming from Europe, public transport is a bit of a shocker in Indianapolis.

On Bump Day, a week before the race I ended up randomly chatting to a cheery bunch of locals who have been going to the great race since they were little. Upon discovering that I was a rookie, they insisted on giving me an extensive tour of the facility in their truck while throwing a exquisite selection of cold American beers my way to enhance my experience.

They were kind enough to invite me to their party on Saturday before the race, so I joined them at the infamous Coke Lot campsite right across turn four. It was all good fun and it was great to catch up with the fans to discover what the Indy 500 really means to them.

While for some it is just another reason to get drunk, as witnessed on Friday’s Carb Day during the Lynyrd Skynyrd concert, for others it is all about those two holy weeks in May. And they spend the other fifty weeks of the year anxiously looking forward to the next one. It is a celebration of speed, history and tradition that Europeans are simply not familiar with. 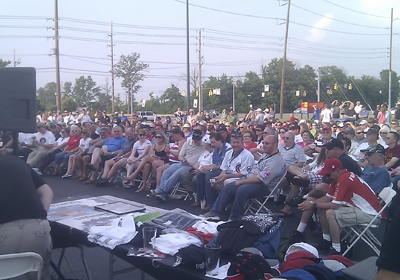 Plenty of fans turned up for the fifth edition of the Carb Night Burger Bash.

Many of those devoted fans met up at the annual Carb Night Burger Bash just north of town at a burger restaurant. The Bash is an event hosted by long time IndyCar journalist Curt Cavin from the Indianapolis Star newspaper, who covered his Indy 500 a year before I was born. Curt was kind enough to give me a ride to the event, as a nightly trip back on a bicycle without lights probably wasn’t the way to go.

Hundreds of fans showed up to ask questions, bid on IndyCar items up for auction and show their love for fallen champion Dan Wheldon. As usual, Curt got a few IndyCar drivers to make an appearance, including the lovely Pippa Mann and Katherine Legge.

Right at the end of the night, last year’s pole winner Alex Tagliani also dropped by, even though the Canadian had been dragged from one sponsor meeting to another all night long.

It is a great example of how IndyCar drivers one by one go out of their way to be accesible to the fans and how the sport has a fan experience that many other series (Yes, that’s you, F1) fail to offer. Dan Wheldon, who featured on countless fan pictures people were asked to bring along, was an exceptional example of that.

All in one night, the event’s auction raised over $16,000 for children with a hearing impairment. It brought fans closer to eachother, closer to their favourite drivers and paid tribute to one of the greatest drivers and personalities the Indy 500 has ever known. It was wonderful. Just like the Hoosier hospitality.