Posted on May 29, 2012 by Filip Cleeren in Columns No Comments 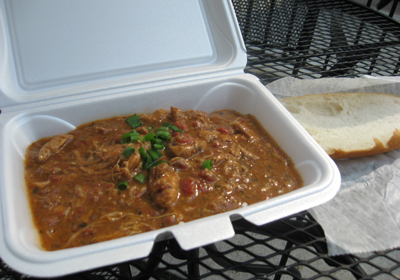 Fortunately, a plate of "drunken chicken" tastes a lot better than it looks.

One of the great things about traveling is discovering new cultures. One wouldn’t necessarily associate that aspect with going to Indianapolis, located smack in the middle of the American Midwest. But after eating a few burgers too many, I discovered a tiny restaurant called Yat’s. The place serves excellent, uncomplicated Cajun creole food on a budget, perfect for a shoestring traveller like yours truly.

I gambled on a dish called Drunken Chicken and just a minute later I got a lot of goodness in return for only seven dollars. The plate had the looks of a steaming pile of sick, but it tasted like an explosion of heavenly southern flavours with a perfect blend of spices. It is just the comfort food you need on a day off after a hectic, but glorious ten days at the Indy 500. The dish’s name also reminded me of more than one individual I saw crawling around the Speedway on Carb Day.

Detroit's Belle Isle is a beautiful location for a motor race, although its layout doesn't match that of Montréal's Île Notre Dame.

I wish I had found the place a few days earlier, as I’m gearing up for a ten hour bus and Amtrak trip to Detroit tomorrow for IndyCar’s Detroit Grand Prix on Belle Isle. The ‘beautiful island’ is situated in the Detroit river and is effectively the American/Canadian border, separating ‘Motor City’ from the Canadian city of Windsor on the opposite river bank.

Windsor is also where I’ll be staying during the weekend, taking the ferry up to Belle Isle and back. The island’s street course is reminiscent of that of Montréal’s Isle Notre Dame which is the next stop for the Canadian Grand Prix F1. Though Belle Isle’s technical layout is not quite as racy and suitable to overtaking as the splendid Circuit Gilles Villeneuve, it will be interesting to see if Dario Franchitti can carry Honda’s momentum after his third Indy 500 win on a twisty street course.

One would also expect a lot from the inevitable road course master Will Power, with Sébastien Bourdais being a good pick as the dark horse of choice. The Frenchman endured a frustrating month of May in a car that usually tried to kill him, but showed well in the previous road courses with the lacklustre Lotus engine. Since Indy he has a powerful Chevrolet power plant in the back of his Dragon car.