Posted on June 1, 2012 by Filip Cleeren in Features No Comments 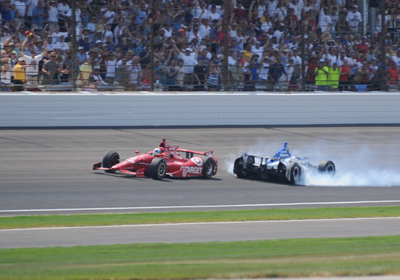 When Takuma Sato made a brave move down the inside of Dario Franchitti on the last lap of the Indy 500, he thought he was three corners away from drinking the milk.

Moments later he spun into the barriers, missing the chance of a lifetime to make history at the Brickyard.

But talking to the press at the Detroit Belle Isle Grand Prix, the 35-year-old Japanese reckons he would do the same thing if he could get another chance.

“It’s just one of those unfortunate incidents that didn’t play out the way you wished”, Sato says. “It’s easy to say now, but at the time I knew Dario knew I was going to make the move. We’re talking about a 225 miles per hour turn in and only a couple of inches. It was very close. If I’d get the same chance, I’d do the same thing, maybe slightly different. But I don’t regret it at all, because I was going for the win and I had the chance.”

Sato received criticism from some pundits who thought he was too impatient and should have waited to pass the Scot on the backstraight, but the Rahal Letterman Lanigan driver disagrees.

There was a lot of wind on the backstraight, so passing in Turn 3 was difficult. I knew it had to be done in Turn 1,” Sato reckons.

“I passed Dixon a lap earlier and I was in the same situation with Dario. On the front straight I saw the big Ganassi wing in front of me. I had a nice tow, good momentum. The move was made before turning in and the moment I turned in I was confident I had the job done,” Taku recalls one of the most thrilling finales in IndyCar history.

“IT WAS AN EXCITING MOMENT. UNTIL I GOT SIDEWAYS.”

“Dario decided to turn in once I was already alongside. It was tight and perhaps he didn’t give me enough room and I dropped a wheel on the white line. I was only on 20 percent throttle as I tried to hang in there and calm the car down. I was hoping we would both make it through, but unfortunately my car slided. I feel very fortunate I didn’t take Dario out; at least it was only me. I thought I just gave it my best shot. It was an exciting moment. Until I got sideways …”

Sato has a reputation for being very aggressive and sometimes getting involved in accidents, which goes back to his period in Formula 1. But he’s not impressed with people inevitably using terms like ‘banzai’ and ‘kamikaze’ to describe his style. “To have people say that is very inappropriate. Those words mean you’re prepared to crash. Professional race car drivers are not like that.”

Sato had a spirited conversation with Franchitti after the incidents, but feels the two can move on. “Obviously two drivers going for the win are going to have a slightly different angle,” he quips. “I won’t say any more, but we were OK. As everyone knows he’s going to be hard to overtake, but I’ll keep pushing.”

After his excellent run in the Rahal car, Sato is craving for more. “Even today I was still excited about it. I’ve been going through all the emotions, but I have to learn from it. I love Indy. I had a great experience in the Indy 500 and I really enjoyed the race. Bobby Rahal and I worked together very well and it was great to have a teammate like Michel Jourdain Jr. It’s not going to be too easy, but I hope I get another chance next year.”