Watching practice for the German Grand Prix at Hockenheim this weekend reminded me how much I miss the old layout. That run into the forest was a strangely eerie experience and one that, in the rain especially, was reportedly terrifying. These days we are used to clinical, carefully planned and often characterless tracks that will […]

For the third consecutive year, Team FSE will head to Ypres to battle for the silverware in the Ypres Historic Rally on Friday 21 and Saturday 22 June. Following back-to-back wins in 2010 and 2011, rally ace Robert Droogmans is looking to prolong his title once again. Kurt Vanderspinnen’s team at Historic Rally Promotions will […]

When Takuma Sato made a brave move down the inside of Dario Franchitti on the last lap of the Indy 500, he thought he was three corners away from drinking the milk. Moments later he spun into the barriers, missing the chance of a lifetime to make history at the Brickyard. But talking to the […]

English football giant Chelsea F.C. and Swiss Formula 1 outfit Sauber have officially presented their collaboration during the Spanish Grand Prix weekend in Montmelo. The two teams will work together the promote eachother’s brands. The venture gives both parties a chance to reach a bigger audience and reinforce their brands. From now on the Chelsea […]

Gilles Villeneuve was a rare thing, a man whose legend began before his death. The same could be argued, one supposes, for Ayrton Senna, another iconic racing driver who lost his life before his time had come. Yet there are notable differences: It can be argued that the Senna legend was exaggerated – some would […]

McLaren star Jenson Button enjoyed an intensive three hour bike ride with Belgian cycling champ Philippe Gilbert. “He’s really strong on a bike for an F1 driver,” Gilbert is impressed. “I’m not so sure I’d be as quick on a circuit…” Button is a keen triathlete. During the three-week break between the Malaysian and Chinese […] 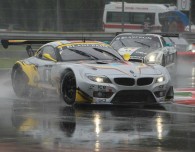 The Monza opening round of the 2012 Blancpain Endurance Series built on the success of last year’s inaugural season with a remarkable 55 car entry list. Monza had all the features of a modern classic with plenty of drama and changeable conditions on one of the world’s great historic circuits. The season opener proved to […]

With the current focus on the political situation in Bahrain it is all too easy to forget that Fun Still Exists. This is not the place to discuss whether the Bahrain Grand Prix should have gone ahead or not. What’s interesting though is that thirty years ago – in 1982 – F1 was embroiled in […]