Posted on February 21, 2012 by Filip Cleeren in Features, Team FSE No Comments 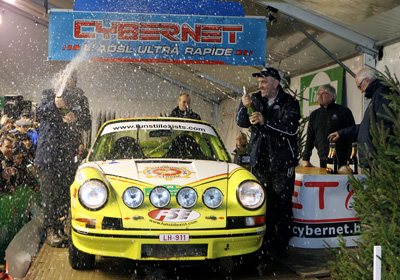 Robert Droogmans and Johnny Vangrieken stumbled upon one surprise after the other. One week before the Legend Boucles de Spa, the pair didn’t even know they would take part.

A last-minute programme with Team Fun Still Exists ensured Droogmans would be reunited with fellow Musketeers Marc Duez and Patrick Snijers. And he would make headlines again with a dramatic run towards the podium. “Considering our participation was extremely last-minute and the mishaps we encountered, I’m very pleased to get onto the podium”, Droogmans smiles.

As ever at Spa, Droogmans’ weekend was one of ups and downs. The former European Rally Champion was hungry to track down a victory he could have snatched before, but luck was never on his side in the Ardennes as he developed a love-hate relationship with the event. “For some reason things never worked out for me at Spa, so it was hard for me to like the rally”, Droogmans explains. “My run of bad luck started well back in the eighties and ever since I never managed to win or even finish here. But when I received the phone call five days before the rally from Team FSE, asking if I wanted to take part, of course it was an offer I couldn’t refuse.”

Droogmans has never needed much time to prepare and get on the pace and he duly took a great start in Saturday’s first stages. But then lady luck wandered off to one of Spa’s thermal baths again as Droogmans encountered a brake failure during the second round of stages. “Approaching a left-hand corner I suddenly lost all brakes and went straight off into a run-off area. We lost quite a bit of time, but we were very lucky not to hit anything and skid off into a restricted area for spectators. Suddenly running out of brakes is not exactly what you want!”

In a way Droogmans was lucky to get away with a limited loss of time, which meant he stayed in the hunt for the win. But his hopes of finally winning the Boucles eventually vanished as he suffered a puncture in the second to last stage. “At Ster we caught a flat tyre only one kilometre into the stage. It was quite dangerous to continue but we took the risk and managed to get to the finish line. To end up in third was a total surprise for us as we didn’t have a clue about our position. It was quite the day…”

SURVIVAL OF THE FITTEST

Droogmans wasn’t the only star to hit trouble as this year’s epic Boucles proved notoriously difficult with a high rate of attrition. Several potential winners including Thierry Neuville, François Duval, Stefaan Stouf, Didier Auriol and FSE’s Patrick Snijers all had to retire after mechanical issues. No coincidence, says Droogmans. “The conditions were atrocious this year”, he reckons. “The harsh winter weather of the past weeks didn’t do a lot of good and caused a lot of cracks, holes and puddles on the few gravel stages. The tarmac roads were extremely slippery as well. We were worried about racing on the compulsory snow tyres, but actually tyre degradation wasn’t as bad as we expected.”

What possibly was as bad as expected was the overwhelming amount of fans on the stages, leading to a cancelled first stage of Stoumont and further delays on others. “An enormous amount of people turned up, which caused more headaches during the connections than on the actual stages. It’s the downside of Spa’s great success. It’s the first rally of the year, it’s free and everyone wants to be there.”

Would Robert Droogmans like to be there again himself next year? “Of course! I came very close to winning both this year and two years ago, when I was in the lead near the end, but made a mistake by taking it too easy and slip up. Sometimes you have to be patient to win a difficult race like the Boucles de Spa. Jean-Pierre Vande Wauwer had to wait for a very long time, but he finally did it. I’m convinced I can do it as well and I’m looking forward to coming back more than ever!”