Posted on April 2, 2012 by Filip Cleeren in Features No Comments

Rush Director Ron Howard in action on the Nürburgring.

Fans of motor racing are about to get spoiled on the big screen. The smashing success of the Senna documentary seems to have paved the way for more stories to be told from a long gone era of Formula 1.

First up there’s Rush by director and producer Ron Howard, which tells the story of the (in)famous 1976 season in which James Hunt and Niki Lauda went head to head for the world title and the Austrian had his horrific crash at the old Nürburgring.

Howard is known for successful films including Frost/Nixon, Apollo 13 and A Beautiful Mind, the latter of which earned him an Oscar for best director. 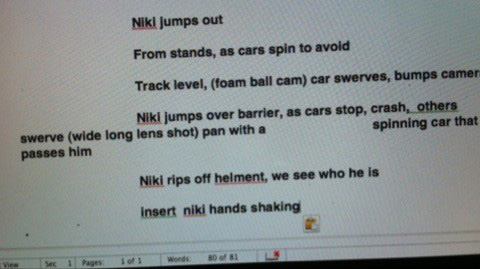 A snapshot of the Rush script.

The role of James Hunt will be played by Australian Chris Hemsworth, with the ravishing Olivia Wilde (TRON Legacy, House M.D.) playing his wife Suzy. Niki Lauda will be played by Daniël Brühl, who is perhaps best known from his breakthrough film Goodbye Lenin in 2001.

Filming has been taking place both on the Nordschleife and in the UK. The ’76 story is gripping enough to make the movie deliver on its title promises.

In addition to Rush, Jackie Stewart has talked about an upcoming film about his relationship with his former Tyrrell team-mate François Cevert, who was tragically killed at Watkins Glen in 1973.

“The storyline is about how two drivers who are normally opposed to each other as team-mates become really close”, Stewart told AUTOSPORT.

“There will be a lot of tears. You know what is going to happen in the end, but the circumstances of it all are complicated – François getting an approach from Ferrari; was I going to retire as I hadn’t even told (my wife) Helen? So there is plenty of drama there. I think it will be a very good film.”

The man behind the Cevert film is Brokeback Mountain producer Bill Pohlad and apparently Ewan McGregor being considered for the role of Stewart.

Stewart is also working with Roman Polanski on a 40th anniversary remastered version of ‘Weekend of a Champion’, their film about Stewart’s success at the 1971 Monaco Grand Prix.

“Polanski is redoing it, in High Definition,” Stewart said. “We will be doing the same things we did in the original film, but revisiting them 40 years later. So we’ve driven around the track together again, and we will be talking in the same suite at the Hotel de Paris. It is going to be interesting.”

Interestingly all three films will tackle the ’70, an era of a golden generation of drivers whose life was cut short due to tragedy. But also an era in which the sport was still a sport, before money took over. Nostalgic fans have a lot to look forward to indeed.