Posted on November 9, 2012 by Filip Cleeren in Features No Comments 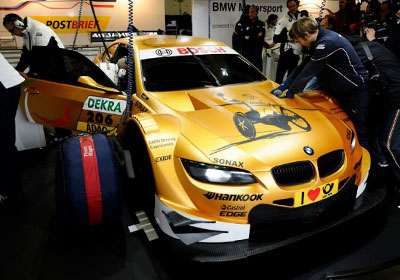 In case you were wondering if there’s anything Alex Zanardi can’t do, well … there probably isn’t. The former CART champion and paralympic gold medalist received an invitation to test BMW’s DTM car to celebrate the 40th anniversary of its M-line and passed the test with flying colours.

The BMW M3 DTM was painted gold in honour of Zanardi’s recent achievements at the Paralympic Games in London, where the Italian took two gold medals in the handbike events. Zanardi used to compete in the European and World Touring Car Championship for the German constructor, taking four wins.

Zanardi took to the track for 32 laps around the Nürburgring grand prix circuit in a modified DTM machine, braking with his prothesis leg and controlling the throttle manually on his steering wheel.

The 46-year-old Italian was delighted to be back behind the wheel once again. “I am overjoyed to have been given the opportunity to drive the BMW today”, Zanardi says. “This is a very special day for me, and one I will always remember fondly. I would like to thank everyone at BMW who has helped make this special moment possible for me. When I first saw the golden car I was overwhelmed.”

Zanardi all but ruled out a return to racing, but he’s as keen as ever to focus on new challenges in the future.

“I still have a passion for racing,” says the Italian. “However, I’m not sure whether our demonstration drive will be anything more than just that, as the level in the DTM may possibly prove to be too high for someone of my age. As such, my main focus is on something completely different after today’s drive: I felt that the BMW family is still behind me and loves me. They showed that once again today.”

“I am delighted we have taken on this adventure successfully with Alessandro Zanardi,” BMW Motorsport director Jens Marquandt says. “For years he has been a valued member of the BMW Motorsport family and is a great role model for us all. Despite his handicap, he approaches every challenge with great optimism and passes every test with flying colours.

“His medals at the Paralympic Games in London are fine examples of this, as are the four race victories he achieved in the FIA World Touring Car Championship for BMW Motorsport. As we have seen today, the challenge of driving the technically complex BMW M3 DTM also proved to be no obstacle for him.”

The question just remains which obstacle is next for Alex Zanardi. And how he’s going to overcome it. Because that’s exactly what he is going to do.