Posted on February 24, 2012 by Filip Cleeren in Features No Comments 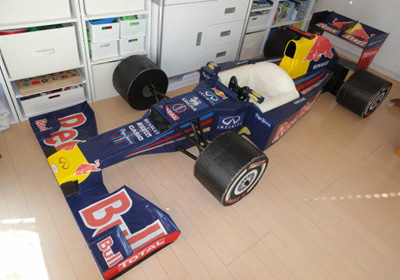 A Japanese mother has built her son a cardboard replica of the 2012 Red Bull Formula 1 car.

Some kids have all the luck. As a gift to her 4-year-old son who is a massive fan of Sebastian Vettel, a Japanese mother has built a fabulous replica of Red Bull’s all-new RB8 Formula One car.

The car is completely made out of cardboard and took a full month to cut, paint and assemble and has apparantly been tailored to have a Wii console fitted inside the cockpit. Young Kota, grinning from ear to ear in his also home-made Red Bull suit, is keen to show off his new ‘toy’ in his hero’s favourite pose, Sebastian Vettel’s infamous finger.

The RB8 replica shows an extraordinary amount of details, including the new-for-2012 stepped nose. In fairness the woman’s job has been made a bit easier with the absence of the banned, sculptured blown diffuser …