Posted on March 2, 2012 by Filip Cleeren in Features No Comments 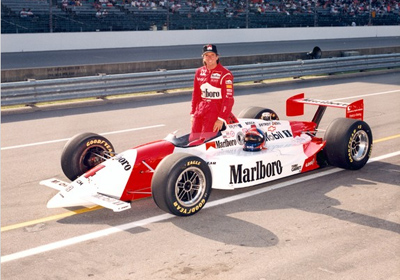 Rubens Barrichello is officially an IndyCar driver, contesting the 2012 season with his great friend Tony Kanaan at KV Racing. Barrichello is not the first Brazilian to switch from F1 to American open wheel racing.

After two world titles in 1972 and 1974, Emerson Fittipaldi’s F1 career was on a downward slope as he made a surprise move to his brother Wilson’s team Fittipaldi Automotive. The Fittipaldis couldn’t emulate Emerson’s earlier success and in 1980, after five difficult seasons, ‘Emmo’ decided to call it a day.

After a three-year break, the still only 37-year-old Fittipaldi returned to racing with a move to CART. The Brazilian joined Patrick Racing, the team that has since evolved into the current Rahal Letterman Lanigan. Results improved gradually, with Fittipaldi finding his way to victory lane in his second season. He added five more wins in the next three years, before finally becoming a champion again. In 1989 Fittipaldi and Patrick had all their ducks in a row as their Penske-Chevrolet didn’t finish outside the top-five all season – barring three retirements – on their way to the CART title. Furthermore, Fittipaldi also conquered the much coveted Indy 500 title at the Brickyard.

Following his Indy success, Fittipaldi switched to the powerhouse Team Penske and enjoyed several more competitive seasons. In 1993 he added a second victory at Indianapolis, beating Arie Luyendyk and reigning F1 champion Nigel Mansell. It was the biggest of ten wins in his Penske days that lead him to two runner-up spots in the championship. After a heavy crash in 1996, the Brazilian was forced to retire from the sport.

Long before his Indy triumphs, Fittipaldi had already won the US grand prix at Watkins Glen. Rubens Barrichello emulated the first part of his fellow countryman’s success when he won the US grand prix in 2002, coincidentally at the Indianapolis Motor Speedway. With his move to IndyCar completed, 39-year-old Barrichello is ready to take on part two of the Fittipaldi challenge.