Posted on March 8, 2012 by Filip Cleeren in Features No Comments 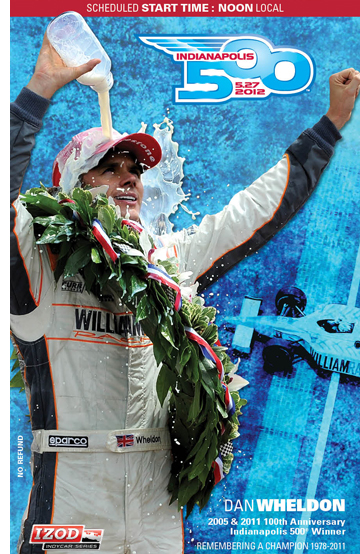 Every attendee at the Indy 500 receives a ticket to hold on to.

In an undoubtely long series of tributes the Indianapolis Motor Speedway has honoured the late Dan Wheldon on the ticket for the next Indy 500. All ticket holders for Race Day will get a ticket showing Dan spilling the milk after his unlikely victory last May, a great memorabilium to remember the two-time winner.

“The stirring victory ignited a celebration at IMS that will be remembered for generations”, says the IMS press release. “One of the highlights was Wheldon kissing the Yard of Bricks repeatedly and then laying on the Yard of Bricks on his back, with arms and feet in the air in pure joy over his unlikely victory, which came in his first start of the 2011 IZOD IndyCar Series season.

“Winning the Indianapolis 500 was a dream of Dan’s since he started racing, and he was proud to represent the Indianapolis Motor Speedway and the Indy 500 after he won it the first time in 2005,” said Susie Wheldon, Dan Wheldon’s wife. “But winning it the second time, in such dramatic fashion with a new team, was something Dan cherished so deeply because he really appreciated another chance to compete at the race that meant more to him than any other.”