Posted on March 24, 2012 by Filip Cleeren in Features No Comments

More often than not Sepang features plenty of rain.

Right off the back of the season opener in the ever-amazing Melbourne, the Formula 1 circus heads to Kuala Lumpur for the Malaysian Grand Prix. On paper not as fun as one as Australia’s most vibrant cities, but there’s still fun to be had in the Malaysian capital.

Kuala Lumpur is most famous for it’s Petronas twin towers. Petronas, which is also the main sponsor of the Mercedes F1 team and title sponsor of the grand prix. At the base of the iconic megastructure, Kylie Minogue is due to perform at the F1 Rocks concert. It’s a whole different kettle of fish compared to the Melbourne line-up of Lenny Kravitz, The Cranberries and Wolfmother, but fans of nice visuals won’t be let down presumably.

Concerts or not, you’ll get sweaty in the boiling Malaysian humidity in the blink of an eye. But that’s okay, because the race has been hit by tropic thunderstorms more than once. In 2001 a short deluge led to Dutch driver Jos Verstappen driving out of his skin to a seventh place in the Arrows, while in 2009 the race had to be halted because of monsoon floods. Jenson Button won the shortened race as drivers were awarded half points for the first time in aeons. Timo Glock, now struggling at the back in the Marussia, will have sweet memories of finishing third in the Malaysian rain for Toyota. The late afternoon start plays a part in that, considering it’s the most likely time of day for rainfall. A ‘natural’ way to spice up the racing. 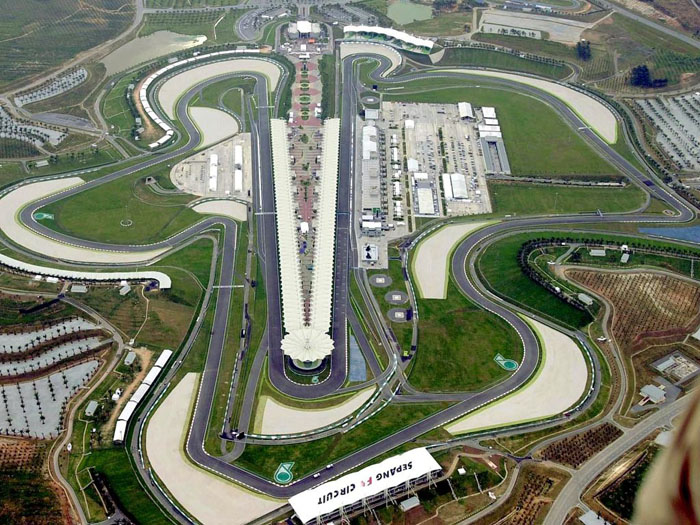 The fast and flowing Sepang circuit is easily one of Hermann Tilke's best efforts.

It’s not quite a fun fact that the Sepang International Circuit was drawn by none other than Hermann Tilke. The fun part is however that it is one of his very best efforts, with a sweeping, fast-flowing track that provides overtaking possibilities on the two, wide, back-to-back mammoth straights. Combined with the perennial rain threat, you’ll be pleased to find out races are hardly ever dull here. Which is more than can be said of some of Tilke’s other creations.

Sepang is not the first location for a Malaysian Grand Prix. From 1968 to 1982, the race was held on the Shah Alam Circuit, featuring Formula 2, Formula Atlantic and Formula Pacific over the years. The venue also hosted the World Sportscar Championship and World Superbikes and counts Jacky Ickx and Mick Doohan among its famous winners. The circuit was just over 3,5 kilometres long and designed by Dutchman John Hugenholtz, responsible for stunning tracks like Suzuka and Zolder. Following the arrival of F1 at Sepang, Shah Alam was closed down and redeveloped into a housing project.