Posted on May 16, 2012 by Steve Turnbull in Features No Comments 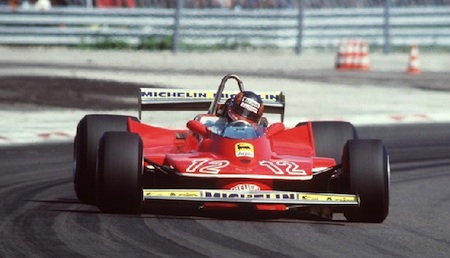 To an entire generation, Gilles Villeneuve epitomised the 'Racing Driver'.

Gilles Villeneuve was a rare thing, a man whose legend began before his death. The same could be argued, one supposes, for Ayrton Senna, another iconic racing driver who lost his life before his time had come. Yet there are notable differences: It can be argued that the Senna legend was exaggerated – some would say created – by his early and tragic death. The same cannot be said of Gilles.

To a generation – those who followed Formula One in the late 1970’s and early 1980’s – Gilles epitomised the Racing Driver, full stop. He was a man apart, a different breed, and he remains so. Back then F1 was a different world. The real big money was just coming into the sport, live race broadcasts were sporadic and limited, and the weekly wait for Autosport was a fan’s ritual that was rigidly adhered too. This was, of course, the world before the internet.
Perhaps the wait for news, the anticipation that accompanied the wait, added to the glamour. But it does not go far enough to explaining the legendary status that Gilles achieved, even during his all too short life.

Here’s a challenge: find a random photograph of Villeneuve in action, online or in a book, and take a look. Now, find one that does not portray a sense of drama and excitement. The latter is a much harder challenge than the former. The reason is simple: Gilles simply was excitement and drama, every single time.

There is another reason why we should talk about the Villeneuve and Senna legends side by side. Ayrton was a master of his art – no doubt about that – but he brought to the sport a new and, for many, ugly aspect that still prevails to this day. Senna’s no holds barred ‘I’m coming through, like it or not’ attitude was, strangely, little frowned upon by the authorities and subsequently taken to extremes by the likes of Michael Schumacher and others. It is impossible to imagine Villeneuve driving in this manner; he simply would not have thought about it.

The famous Dijon ’79 sequence, in which Gilles and René Arnoux scrap over second place as if it was going out of fashion, confirms this. Yes, the two touched wheels on occasions and yes, there were some risky and opportunist moves, but never once was there any sign of these two young, relatively inexperienced drivers not giving the other room. It was clean, hard racing, but one can’t help feeling if we saw that today – two young charges going hammer and tongs – one or both would end up in the wall.

Of course, many readers will point out that Gilles was not the only one. This was an era that preceded the massive salaries drivers command these days. It was a time when privateer teams were still very much in the mix. It was also a time when changes were coming; Renault had driven a coach and horses through the rule books in 1977 and begun the turbo revolution. Only those with little foresight dismissed the ‘Yellow Teapot’ as a joke in that first season. The more sensible had their eye on turbocharged engines very quickly indeed.

It was also an era when drivers were in it for fun, drivers for whom racing cars was simply their life. Patrick Depailler, a fellow in a similar vein as Gilles, was one. He lost his life in a dreadful accident in 1980 at Hockenheim. Jacques Laffite – who went on to have a lengthy and successful career – was another, and René Arnoux, as far removed from the image of a racing driver as can be, perhaps the closest in terms of attitude. But Gilles was different. And everyone knew it.

Some of the stories that have been retold this week have had old-timers smiling: the legendary wet practice session at Watkins Glen, 1979, was a typical Gilles moment. What was the point in going out in the pouring rain, in a session that counted for nothing? For Gilles, it wasn’t about the point, it was simply because he could. What makes that instance all the more interesting is that the garages emptied, as everyone flocked to the pit wall to watch this mesmerising display. He ended up with a time nine and a half seconds faster than the next best time from the session.

Some will tell you that Gilles was a madman, a ‘Rock Ape’ as many labelled him at the time. That’s nonsense; he was a racing driver, and if it moved, he would race it. Perhaps – and it has been suggested – Gilles lacked a technical vision that other drivers brought to the game. He had, after all, the ability to ‘drive around’ a problem like none other. This does not do the man justice for his feel for a car was simply sublime. 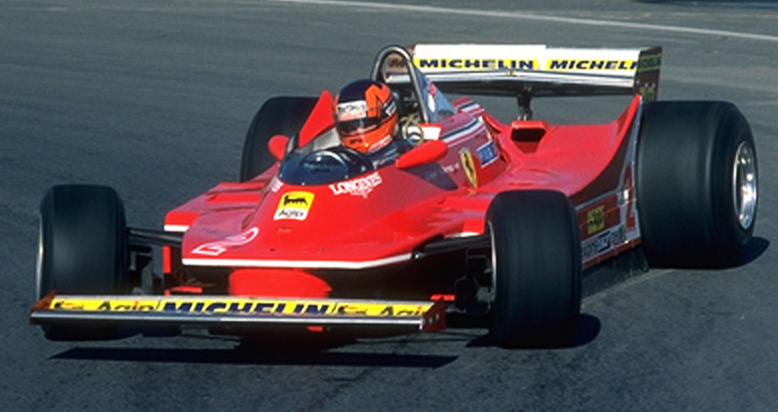 Gilles Villeneuve in a classic moment of opposite lock.

Others will tell you that Gilles greatest drive came at Monaco in 1981, where he won in the first Ferrari turbo car, the 126CK. I disagree: His greatest drive – and one of the greatest ever – came one week later at Jarama, in the Spanish Grand Prix. Having qualified only seventh, Gilles made one of his familiar storming starts and found himself in third. He trailed the leaders – the Williams pair of Alan Jones and Carlos Reutemann – and soon inherited the lead when he passed the Argentine and Jones spun.

The last 18 laps of the race saw Gilles, in a car that deserved the term ‘dog’ more than ever before or since, fend off a train of cars by using the turbo power on the straights and, well, hanging on for dear life in the corners. It was a master class of deft, careful driving – far, then, from the perceived image of the Rock Ape.

It wasn’t just Gilles driving that made him special; the man was completely apolitical – exemplified by his complete lack of understanding of Didier Pironi’s antics on that fateful day at Imola in 1982 – and saw the best in everyone and everything. Indeed, when Pironi omitted to invite Gilles to his wedding, his explanation to wife Joann was that the Frenchman had probably forgotten.

Gilles was an artist. Many have compared him to the great Tazio Nuvolari, another master of his art from a previous era, and indeed Enzo Ferrari was known to allude to the similarities. But, for me, to look for comparable drivers to Gilles is an irrelevance. Turning on the TV, waiting for the start and wondering what this crazy Canadian was going to pull out of the bag was for many of us what F1 was all about in those days.

I often wonder what he would have achieved had he lived beyond 1982. He was leaving Ferrari, that much is certain, and there are many who believe he had agreed terms to sign for McLaren for 1983. A famous incident in which Ron Dennis hung out pit boards offering increasing amounts of money may be apocryphal, but has a ring of truth to it in many ways. Imagine Villeneuve in the mighty Tag-powered McLaren’s, and you have a mouth watering prospect.

Many say he didn’t have the temperament to win a championship. If they are saying that to win a title you need to drive for points they have it absolutely right. For Gilles, driving for points was unthinkable; he drove to win. For him, the world championship was something that came about once you won the requisite races; it was not the be all and end all – racing was.

Gilles Villeneuve would have been amused to find his name ‘trending’ on Twitter this week. He would have been proud, too, of his son Jacques driving his 1979 312T4 in a special celebration at Fiorano on Tuesday. But, and this is the crux, he would have hated the current F1 with its massive egos, political machinations and on track lack of etiquette. Gilles belonged to a different era, one where drivers fought hard and fair. Long may he remain there.