Posted on August 31, 2012 by Filip Cleeren in Features No Comments 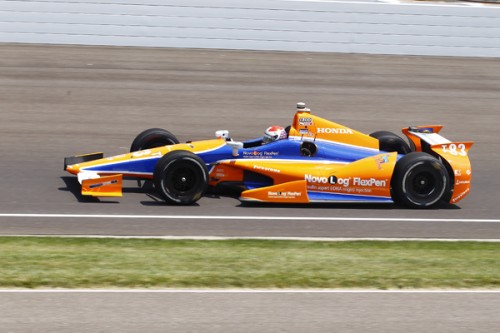 Charlie Kimball is far from a household name yet, but the 27-year-old IndyCar driver from Camarillo, California is making his mark on and off the track.

Kimball was snapped up by the powerhouse Chip Ganassi team, a scenario he couldn’t have dreamt of five years ago. While racing in the European feeder series Formula Renault 3.5 in 2007, the American was diagnosed with type 1 diabetes, a condition that put serious question marks over his future as a race car driver. Kimball decided to keep on fighting to realise his dreams. And he did.

“When I was diagnosed I was worried right away that I’d have to hang up my helmet,” Kimball tells this writer. “And I don’t think anyone would have blamed me if I walked away, because there wasn’t anyone to look up to so I could say: ‘Yeah, he’s done it so I can do it as well.’ It was an unknown factor. I really wanted to make sure it’s safe and responsible, because it’s not just me out there. In the Indy 500 there’s 32 other drivers racing at 230 miles per hour. I have to pay attention to that. But after the first few days I thought: ‘Man, I love driver race cars so much. I’m not going to let something like diabetes get in the way of that. Of doing what I want. Of being where I feel most alive.’”

Fueled by his ambition and motivation to overcome his disease, Kimball carried on. But that doesn’t mean it was an easy path.

“It’s been a process and it still is. I was diagnosed 4,5 years ago and I’ve since met great, active people who have had diabetes for 50 or 60 years. They are inspirations to me. I was very fortunate with the advance in technology. The continuous monitor, the flexpens, the insulins are better than they’ve ever been. So I had the tools available that I needed to do a good enough job.” 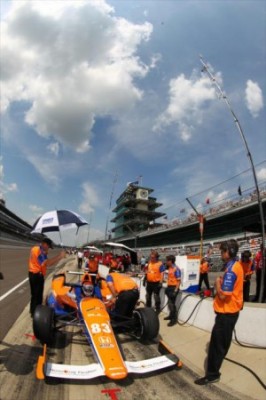 In his fight against diabetes and his quest to raise sponsorship to find a seat in IndyCar, Kimball found the best possible partner he could have wished for. He established a bond with Novo Nordisk, a pharmaceutical company that manufactures of flexpens and other diabetic products.

“When I started my relationship with Novo Nordisk, team boss Chip Ganassi gave me some great advice on how to build that relationship and integrate, so they couldn’t just put their name on someone else’s car.Their identity is my identity and vice versa. We work together very closely.

People ask me when I started with Novo Nordisk and my answer is: from the day I was diagnosed. I’ve been using their flexpens all along. I was very lucky being diagnosed in England, where flexpens are used a lot more than in America, so I started using that device right away. It wasn’t before six or eight months later before they knew who I was thanks to my doctor sending them an e-mail.

From there we’ve grown together. In the summer I’m doing a safe driving class with children with diabetes. As a professional driver talking to 14-15 year olds about how to drive safely and how diabetes fits into that programme.”

The nice thing is that I really believe in Novo Nordisk’s mentality. One of their ethics is that they are in business to put themselves out of business. They fund a huge amount of diabetes research working towards a cure so people don’t need insulin anymore. If that happens, they don’t have a market. And they are pleased with that. That’s something that’s very close to my heart. Making things better for everybody down the line is what we need to be doing. In terms of personality and identity, we’re very similar so it’s easy to integrate with eachother.”

Racing with diabetes is a double-edged sword. On one hand Kimball and his team want to get the word out about his conditions, but on the other hand he wants to be treated and respected as a ‘normal’ driver.

And in the diabetes community I will still be known as a driver with Type 1, who has lived his dream and races competitively at the highest level in North America. That’s an inspiration to them. It’s important for me to maintain both personalities, but keep them in balance. When I work at the track I’m a race car driver and when I work in the diabetes community, the disease comes to the fore. 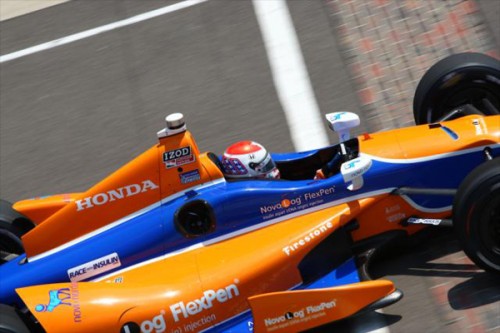 Charlie's affiliation with Novo Nordisk is a no brainer for both parties. (Credit: Indianapolis Motor Speedway)

That doesn’t change the fact that Kimball’s disease requires a very specific and rigourous approach in terms of training and preparation.

“Preparation is even more critical than otherwise. Nutrition, hydration, all the work I do before I get in the race car really matters. It was very hot at Indy and any preparation I did during the race weekend was very small compared to the work I’ve done training last winter. At the beginning of the season I worked with my healthcare team to get some data and create a regimen.

I then get dressed, roll out, test my blood sugar again and make some last minute corrections if needed, like drinking orange juice, and then I get in the race car.

When I’m in the car I’m good to go. I’ve got two drink bottles in the car. One with water to stay hydrated and one with sugar water in case my sugar level starts to get low. We’re also trying to figure out how to get some isotonics and electrolytes into my water the replace the salt you lose while sweating. But that’s the same for everyone.”

In an otherwise difficult season, Kimball has nevertheless made significant progress. He took a career-best second place in July’s IndyCar race in Toronto and is set to continue with Novo Nordisk and Chip Ganassi for another season.

“As a 27-year-old guy I don’t want to say this, but I feel like I’ve gone from being a scruffy little kid to someone who has an idea what’s going on,” Kimball says. “I’ve got a better understanding, though I still have a lot more to learn. Even though I went in with that mindset, until you make those mistakes you don’t know what lessons are out there. You get to that point where, instead of drinking from a firehose of information where you’re just overwhelmed and all you can do is keep up, now I’m looking for opportunities to learn and improve as a driver.”

Kimball’s efforts both inside and outside the cockpit to raise awareness for diabetes haven’t gone unnoticed. Earlier this year he won the prestigious Jefferson award, America’s own “Nobel Prize” for community service and voluntarism. “It was unreal. It’s almost embarrassing in a way that I don’t see what I do as a pure dedication to service because it’s a by-product of doing what I love,” would later tell Associated Press. “But at the same time, it is very important to me to do that.”

“I’m living proof that people with diabetes can live their dream and achieve what they want in life. I was the first diabetic to race the Indy 500 in 2011, and to lead it in 2012. Now I just have to be the first to win it!”